The Downtown Line 3 (DTL3) will open on 21 October 2017, making it the longest underground and driverless MRT line in Singapore, surpassing the 35.7km Circle Line (CCL).  The completed DTL which will be 42km long will facilitate direct travel from the north-western and eastern areas of the island to the Central Business District (CBD) and Marina Bay areas, providing greater connectivity to residential, industrial and lifestyle enclaves. The 21-kilometre long DTL3 comprises 16 stations and is the longest stretch of the Downtown Line to be opened. DTL3 includes three interchange stations at MacPherson, Tampines, and Expo. The MacPherson interchange station links DTL3 to the CCL, while the latter two stations connect the line to the East-West Line (EWL), providing commuters greater accessibility to the rest of the island and significantly shortening their travelling time. There are eight Civil Defence shelters on DTL3, namely Geylang Bahru, Bedok North, Bedok Reservoir, Tampines West, Tampines, Tampines East, Upper Changi and Expo.

The first 10 stations from Fort Canning to Bedok North have achieved their Temporary Occupation Permit status while final fitting out works are currently in progress at the last six stations.

Fort Canning station is located at the intersection of River Valley Road and Clemenceau Avenue. The station has two entrances and will serve developments in the area including Fort Canning Park, Liang Court, U.E Square, Park Hotel Clarke Quay and Robertson Quay Hotel, which were previously not connected to the rail network.

To construct the Fort Canning station, part of the Singapore River was diverted.  A new canal was first constructed to divert a 42-metre wide section of the river out of its original alignment.   The river was then cleared of obstruction and filled with a stabilising material before tunnelling works took place.  Once the tunnels were completed, the river was reinstated to its original position.

The architecture of the station has considered two historical elements of the locality - Fort Canning Park and the former National Theatre which was located just a stone’s throw from the station location. The natural and green theme is amplified in the curved ceiling inside the station, with various green accents peppered around the walls and vent shafts.   Abstract motifs of the National Theatre are also etched into the concourse stone walls and repeated on the glass fritting at ground level.

Bencoolen station is located at Bencoolen Street, near the junction with Bras Basah Road. The station is about 140 metres long and 22 metres wide. At 43 metres below ground, it is the deepest MRT station in Singapore. The station had to be constructed at such depth as existing infrastructures had to be taken into consideration including buildings on the street level, as well as the underground North-South Line (NSL) and CCL tunnels. It has three entrances and comprises six levels – concourse, upper mezzanine, lower mezzanine, platform and two service levels. To provide greater connectivity to the existing rail network, the station has an underground unpaid linkway connected to CCL Bras Basah station through the existing SMU basement. The NAFA Campus extension is integrated above one of the station’s entrances.

The station will serve students, office workers, businesses and tourists, with its close proximity to the Nanyang Academy of Fine Arts (NAFA), Singapore Management University (SMU), Manulife Centre, Sunshine Plaza, National Museum and hotels along Bencoolen Street. There are also several places of worship around the station such as the Kwan Im Temple, Sri Krishnan Temple, Maghain Aboth Synagogue and Masjid Bencoolen.

During the construction, Bencoolen Street had to be closed to traffic to provide the necessary working space.  Work was carried out in close proximity to adjacent buildings while excavations work was carried out in the very hard Fort Canning Boulder Bed ground. With the redesigned Bencoolen streetscape boasting wider pavements, an all-day bus lane, dedicated cycling paths and more bicycle lots, the opening of the station is a step further in transforming Bencoolen into a car-lite area.

Jalan Besar station is located at the junction of Jalan Besar and Weld Road. It has two entrances and comprises two levels – concourse and platform. The station will serve Sim Lim Tower, Stamford Primary School, residences and shophouses in the vicinity. The station is within five minutes’ walk of Rochor station (on the DTL) and Bugis station (on the EWL, DTL) allowing commuters to easily transfer between rail lines.

The station was constructed by the top-down method where a few metres depth of earth was excavated before the slab level was cast with concrete. The concrete is allowed to set before the next level is excavated and the process is repeated until the excavation reaches its intended depth. This method is often used when excavation takes place in built-up locations with limited space. Located at the foot of Blk 72, the station will link the residents of the area, particularly the Kolam Ayer precinct, to the rail network. The artwork of the station, ‘Constructed Memories’ was created to bring back the construction and industrial memories of the Geylang Bahru Industrial Estate. 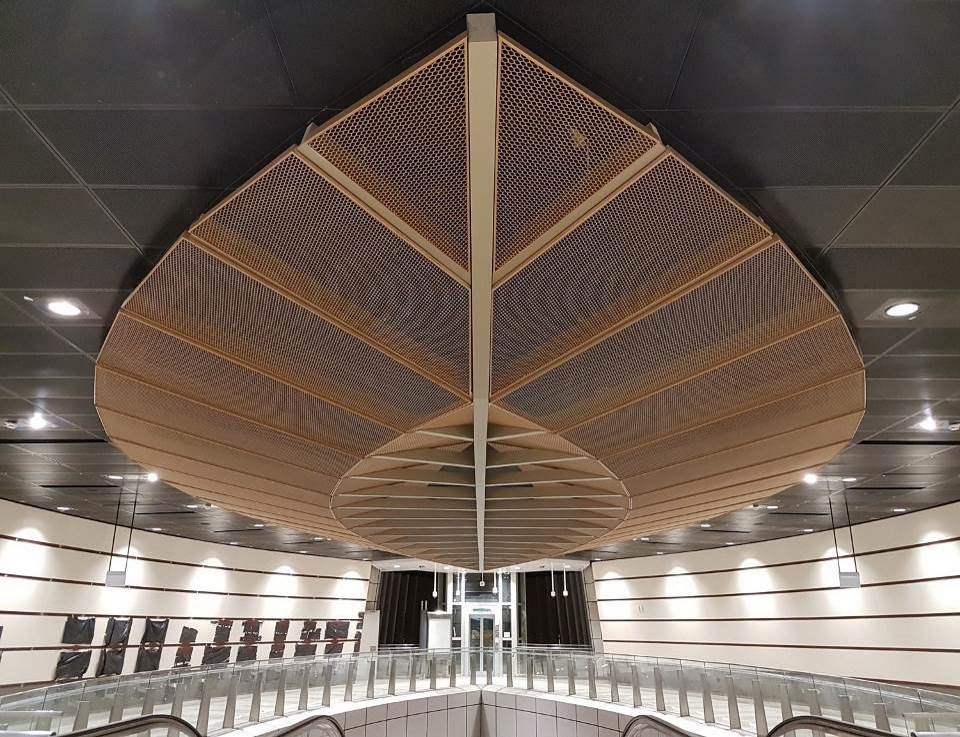 Mattar station is located near the junction of Merpati Road and Mattar Road. The station has two entrances. One of the entrances leads to Merpati Road and will primarily serve Canossa Convent School, Macpherson Primary School, Masjid Sallim Mattar Mosque and those working in Kallang Pudding area. The other entrance leads to Mattar Road near the Circuit Road hawker centre (Blk 79 and 79A Circuit Road) and the Macpherson Community Club.

During the construction of the station, special care had to be taken as tunnelling works were carried out close to the Kallang – Paya Lebar Expressway.

MacPherson station is located along Circuit Link, near the junction with Circuit Road. It has two entrances and comprises three levels – concourse, mezzanine and platform. It will serve Geylang Neighbourhood Police Centre, industrial buildings and residences in the vicinity.

The new station will allow commuters to conveniently transfer to the CCL as the DTL platforms are connected directly to the CCL platform though a short escalator ride. This could be done as the bottom-most level of the DTL station was constructed along with the CCL station, allowing the two lines to be built in close proximity. During the construction of the station, special care had to be taken to ensure the structural integrity of the existing CCL station. Most of the heavy engineering works were therefore carried out during non-revenue hours. 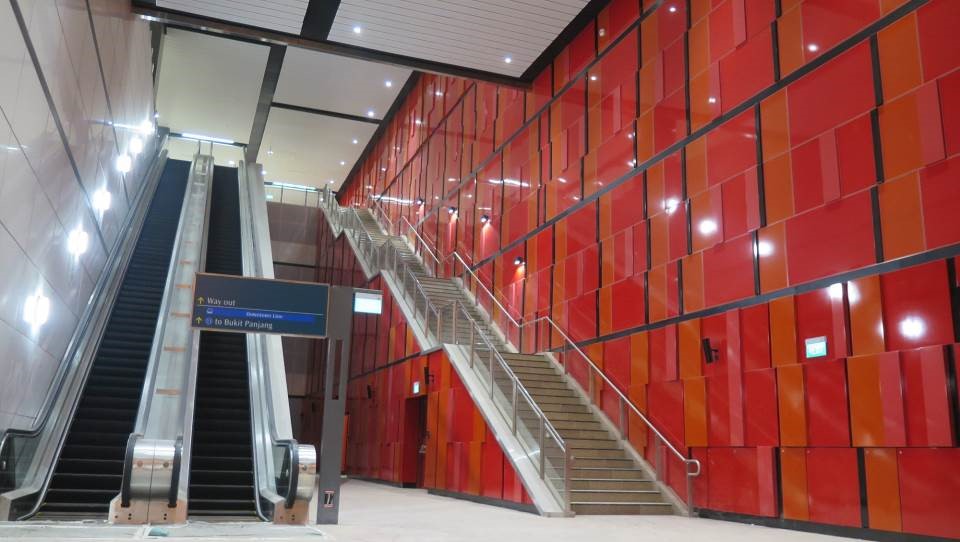 Ubi station is located near the junction of Ubi Avenue 1 and Ubi Avenue 2. The station has two entrances, one of which is located close to the residential estate.  The station aims to serve the nearby high-rise light industrial buildings and also supports a dense HDB estate with schools in its vicinity such as Maha Bodhi School and Manjusri Secondary School.

The station exterior is bronze in colour to depict the colour of Ubi (Malay for “tapioca”).

The construction of the station proved to be a challenge due to the tight site. The existing canal had to be diverted over the station box to allow enough space for one for the station entrances to be constructed.

Kaki Bukit station is located along Kaki Bukit Avenue 1, near the junction with Jalan Damai. The station has two entrances and comprises three levels – intermediate, concourse and platform.

Utilities found within the station footprint posed challenges during the construction of the station, and they had to be relocated during different phases of excavation. The station will serve Bedok North Secondary School, Kaki Bukit Tech Park, Kaki Bukit Tech View, as well as residences along Bedok Reservoir Road, Jalan Damai and Jalan Tenaga. Bedok Reservoir station is located at Bedok Town Park, beside Bedok North Avenue 3. The station has two entrances leading to the residential blocks in the vicinity and the Bedok Town Park.

One of the main challenges was to temporarily divert an existing canal to enable the construction of the diaphragm wall for the station. The canal was subsequently widened and reinstated to its original position after the station box was constructed.

Tampines West station is located at Tampines Avenue 4, near the junction with Tampines Avenue 1. It has two entrances leading to HDB blocks nearby. Both entrances are connected directly to taxi stands, drop-off points and bicycle parks. The last tunnel boring machine (TBM) on DTL3 broke through into the Tampines West station in June 2015, marking the completion of tunnelling works along the DTL3. The station will serve Temasek Polytechnic, Junyuan Primary School, East View Primary School, Tampines Polyview and Tampines Palmspring HDB estates.

The major challenges faced during the construction of this station include extensive diversion of existing utilities and upgrading of existing drainage canals, multi-stage traffic diversions along busy roads and traffic junctions, as well as deep excavation works in close proximity to existing structures.

Tampines station is located along Tampines Central 1. The station has three entrances and comprises three levels – subway (retail level), concourse and platform.  The station is connected to the Tampines Bus Interchange and the EWL and will service commuters travelling to offices and shopping areas around the Tampines town centre. The station will also serve commercial buildings such as OCBC Tampines Centre One, AIA, Telepark, Our Tampines Hub and residences in Tampines.

Along with Paya Lebar, Buona Vista and Expo stations, it is one of the four MRT stations in Singapore that serve both aboveground and underground lines. Due to the close proximity to the existing EWL station, a top-down construction method was implemented to minimise movement to the existing EWL MRT viaduct. Special low headroom machines had to be used to carry out some of the works due to the limited space available.

As the station was located in close proximity to HDB blocks and schools, the various stakeholders had to be kept constantly updated of the different project stages. There were also several road diversions implemented during construction and care was taken to minimise inconvenience to residents, stakeholders and road users. Upper Changi station is located at Upper Changi Road East. At 205m, the station is the longest on the DTL3. It has four entrances and comprises three levels – concourse, intermediate, and platform. Two of the entrances are connected directly to bus stops, taxi stands, drop – off points and the bicycle park. The station will serve the Singapore University of Technology and Design and residential estates in the vicinity. For the convenience of movement between the station and SUTD, there will be an underground linkway between them.

During the construction of the station, numerous underground services had to be supported within the excavation. Furthermore, construction had to be carried out with traffic running above on temporary road decks and many stages of road diversions had to be implemented. Expo station is located along Changi South Avenue 1, 25 metres below ground level. It has four entrances and comprises three levels. The station will primarily serve Singapore Expo and a major business hub, the Changi Business Park. As Expo connects to Changi Airport on the EWL, commuters will have an additional travel option when going to the airport.

The station is an interchange station with EWL. Transfers between the two lines will be seamless as there will be a subway link connecting the two stations, all within the paid area. In 2024, the 2.2 km future extension of the DTL3 from Expo station will join the EWL and future Thomson – East Coast Line (TEL) to allow commuters to easily transfer between the DTL and TEL. 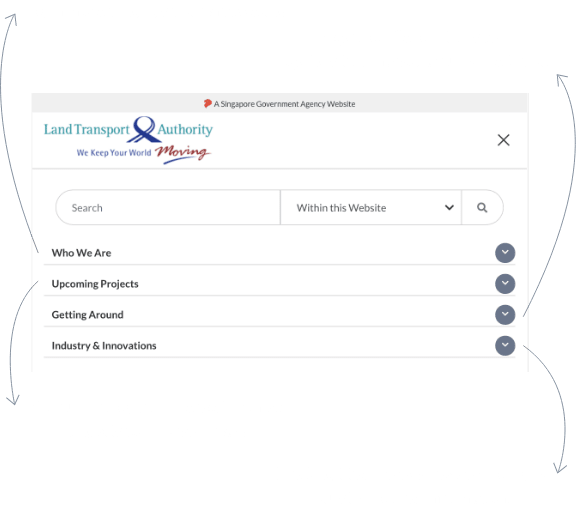